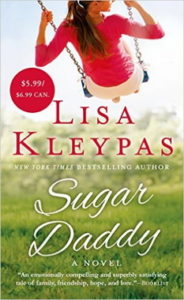 SHE’S FROM THE WRONG SIDE OF THE TRACKS
Liberty Jones has dreams and determination that will take her far away from Welcome, Texas—if she can keep her wild heart from ruling her mind. Hardy Cates sees Liberty as completely off-limits. His own ambitions are bigger than Welcome, and Liberty Jones is a complication he doesn’t need. But something magical and potent draws them to each other, in a dangerous attraction that is stronger than both of them.

HE’S THE ONE MAN SHE CAN’T HAVE
When Hardy leaves town to pursue his plans, Liberty finds herself alone with a young sister to raise. Soon Liberty finds herself under the spell of a billionaire tycoon—a Sugar Daddy, one might say. But the relationship goes deeper than people think, and Liberty begins to discover secrets about her own family’s past.

WILL THEY FIND THEIR HEARTS’ DESIRES OR WILL HEARTBREAK TEAR THEM APART?
Two men. One woman. A choice that can make her or break her. A woman you’ll root for every step of the way. A love story you’ll never forget.

A sneak peek at the first novel in the Travis series

The heroine of Sugar Daddy, Liberty Jones, works for the billionaire Churchill Travis, who has broken his leg in a riding accident. The oldest Travis son, Gage, has made it clear that Liberty and the eight year-old sister she is raising by herself are not welcome at the family mansion…

Every time Gage Travis looked at me, you could tell he wanted to tear me limb from limb. Not in a fury, but in a process of slow and methodical dismemberment.

The day we moved in, our possessions crammed into cardboard boxes, I thought Gage would throw me out bodily. I had begun to unpack in the bedroom I had chosen, a beautiful space with wide windows and pale moss-green walls, and cream-colored molding. What had decided me on the room was the grouping of black and white photographs on one wall. They were Texas images; a cactus, a bob-wire fence, a horse, and to my delight, a front shot of an armadillo looking straight into the camera.

As I opened my suitcase on the king-size bed, Gage appeared in the doorway. My fingers curled around the edge of the suitcase, my knuckles jutting until you could have shredded carrots on them. Even knowing I was reasonably safe–surely Churchill would keep him from killing me–I was still alarmed. He filled up the doorway, looking big and mean and pitiless.

“What the hell are you doing here?” His soft voice unsettled me far more than shouting would have.

I answered through dry lips. “Churchill said I could choose any room I wanted.”

“You can either leave voluntarily, or I’ll throw you out. Believe me, you’d rather go on your own.”

I didn’t move. “You have a problem, you talk to your father. He wants me here.”

A little trickle of sweat went down the middle of my back. I didn’t move.

He reached me in three strides and took my upper arm in a painful grip.

A gasp of surprise was torn from my throat. “Take your hands off me!” I strained and shoved at him, but his chest was as unyielding as the trunk of a live oak.

“I told you before I wasn’t going to–” He broke off. I was released with a suddenness that caused me to stagger back a step. Our sharp respirations pierced the silence. He was staring at the dresser, where I had set out a few pictures in standup frames. Trembling, I put my hand on the part of my arm he’d gripped. I rubbed the spot as if to erase his touch. But I could still feel an invisible hand print embedded in my skin.

He went to the dresser and picked up one of the photos. “Who is this?”

It was a picture of Mama, taken not long after she’d married my father. She had been impossibly young and blonde and beautiful. “Don’t touch that,” I cried, rushing forward to snatch the photo from him.

His head bent as he stood over me, looking into my face with a speculative gaze. I was so bewildered by the abrupt halt of our conflict that I couldn’t summon the words to ask what in God’s name was going through his mind. I was absurdly conscious of the sound of my breathing, and his, the counterpoint gradually evening until the rhythm of our lungs was identical. Light from the plantation shutters made bright stripes across both of us, casting shadow spokes from his lashes down the crests of his cheek. I could see the whisker grain of his close-shaven skin, foretelling a heavy five o’clock shadow.

I dampened my dry lips with my tongue, and his gaze followed the movement. We were standing too close. I could smell the bite of starch in his collar, and a whiff of warm male skin, and I was shocked by my response. In spite of everything, I wanted to lean even closer. I wanted a deep breath of him.

A frown tugged between his brows. “We’re not finished,” he muttered, and left the room without another word.

I had no doubt he’d gone straight to Churchill, but it would be a long time before I found out what was said between them, or why Gage had decided to abandon that particular battle.

Romantic Times:
Top Pick!
“Kleypas is a New York Times bestselling author for a reason. As a beloved historical romance writer, she’s mastered her craft, and it shows in this novel, her first work of contemporary romance and her hardcover debut. The well-rendered characters, fluid narration and skillfully composed dialogue shine, and the plot remains compelling even as it spans more than a decade of change.

Summary: Liberty Jones grew up in trailer-park poverty in rural Texas, the child of a widowed mother with a mysterious past and a current string of no-good boyfriends. But young Liberty is smart, determined and willing to work hard to make her dreams come true. She’s inexplicably drawn to Hardy Cates, the boy down the street who forever claimed her heart at age 13. But he too has ambitions, and they take him out of town and away from Liberty.

Soon alone and with a young sister to raise, Liberty finds herself in the big city, slowly growing up and piecing her life together. In her 20s, she comes into contact with an extremely wealthy businessman, Gage Travis, who some call her sugar daddy. Their relationship is more intense than many believe, however, and it comes with emotionally dangerous complications. When Hardy, now a rich and powerful man in his own right, re-enters the picture as an enemy of the Travis family, Liberty is forced to consider both her past nad her future before making the most difficult choice of her life.
–Marilyn Weigel

“Money is tight while Liberty Jones is growing up in Welcome, Texas, but somehow she and her mother Diana manage. Having good friends like Miss Marva, Lucy Reyes, and especially Hardy Cates, on whom Liberty has a crush, helps. Then tragedy strikes and Liberty must take care of her younger sister and find a way to support them. Hard work and determination get Liberty through cosmetology school, then, while working in a Houston salon, she meets wealthy older businessman Churchill Travis, who offers her a job as his personal assistant. At first Liberty is reluctant to accept, especially since Churchill’s son, Gage, seems to think she’s a gold digger. Then, just as Liberty is settling into her new life and her initially frosty relationship with Gage is heating up and turning romantic, Hardy Cates, her first unrequited love, reappears. New York Times best-seller and RITA Award winner Kleypas moves from historical romance into contemporary women’s fiction with an emotionally compelling and superbly satisfying tale of family, friendship, hope, and love. Writing with wit, wisdom, and warmth, Kleypas has created a book to treasure. John Charles
Copyright © American Library Association. All rights reserved

”Mass market bestseller Kleypas makes her hardcover debut with this entertaining chronicle of Liberty Jones’s rise from the trailer park to life in a Texas mansion. The daughter of a Hispanic father (who dies during Liberty’s childhood) and a white mother, Liberty pines for the hunky bad boy Hardy Cates while mom Diana has another daughter, Carrington, and scores the occasional windfall to keep the familyafloat. After Diana is killed in a traffic accident, Liberty raises Carrington, gets a beauty school scholarship and lands a gig at an exclusive Houston salon. There she meets investment mogul Churchill Travis, who takes a paternal shine to her. A horse-riding accident puts Churchill in a wheelchair, and he hires Liberty to be his personal assistant, with the catch that both sisters have to live with him. Churchill’s oldest son, Gage, immediately distrusts Liberty, and their vicious bickering, as romance readers know, can lead to only one thing. Things get messy once Hardy, now rich, reappears and a Travis family secret is revealed. Though Liberty’s plight and redemption are straight out of the soaps and the prose has its trite moments, Kleypas’s many readers will root for Liberty, a fiery and likable underdog.” (Mar.)
Copyright © Reed Business Information, a division of Reed Elsevier Inc. All rights reserved.