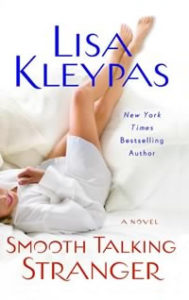 Jack Travis leads the uncomplicated life of a millionaire Texas playboy. He makes no commitments, he loves many women, he lives for pleasure. But no one has ever truly touched his heart or soul. Until one day, a woman appears on his doorstep with fury on her face and a baby in her arms. It seems Jack is the father and this woman is the baby’s aunt. The real mother has abandoned the child to her more responsible sister. And now, Jack is being called upon to take responsibility for the first time in his life. With delicious romantic tension, characters so real they walk onto the page and into your heart, Lisa Kleypas delivers the kind of novel that makes you laugh, love; cry and cheer …in Smooth Talking Stranger.

A sneak peek of third book in the Travis Series

This is a peek at my contemporary romance, titled “Smooth Talking Stranger.”

Ella Varner has it all–a successful career as an advice columnist, a handsome boyfriend, and a circle of friends in Austin. When anyone has a problem, Ella knows the answers.

But one night she receives a call that changes everything. And as Ella’s world is turned upside-down, she meets a man who is the opposite of everything she ever wanted . . . a man who will offer her the most irresistible challenge she has ever known . . .

Aware of a figure approaching from one of the hallways that branched out from the office reception area, I turned gratefully. I assumed it was the receptionist. Instead I saw three men were walking out, all dressed in dark, expensive-looking suits. One of them was fair and slim, the other short and a bit portly, and the third was the most striking man I had ever seen.

He was tall and lean, all hard muscle and easy masculinity, with dark eyes and heavy, well-cut black hair. The way he carried himself—the confidence in his walk, the relaxed set of his shoulders—proclaimed that he was accustomed to being in charge. Pausing in mid-conversation, he gave me an alert look, and my breath caught. A blush crept over my face, and a hectic pulse began at the front of my throat.

One glance and I knew exactly who and what he was. The classic alpha male, the kind who had spurred evolution forward about five million years ago by nailing every female in sight. They charmed, seduced, and behaved like bastards, and yet women were biologically incapable of resisting their magic DNA.

Still staring at me, he spoke in a deep voice that raised gooseflesh on my arms. “I thought I heard a baby out here.”

He gave a short nod.

“I hoped I might catch you between meetings. I’m Ella. From Austin. Ella Varner. I need to talk to you briefly.”

“It’s okay,” Travis said, gesturing for her to give me the bottle, which she had warmed in the office microwave.

I took it, shook a few drops on my wrist, and shoved the nipple into the baby’s mouth. Luke grunted in satisfaction and fell into a busy, sucking silence.

Looking back up into Travis’s eyes, which were as dark and rich as blackstrap molasses, I asked, “May I speak with you for a few minutes?”

Travis studied me thoughtfully. I was struck by the contradictions about him, the expensive clothes and bold good looks, the sense of unpolished edges. He was unapologetically masculine in a way that suggested you should either scramble to get on his good side or get the hell out of his way.

I couldn’t help contrasting him with my boyfriend Dane, whose golden handsomeness and jaw-softening stubble had always been so soothing and approachable. There was nothing soothing about Jack Travis. Except maybe his deep sugar-maple baritone.

“That depends,” Travis said easily. “You gonna try to sell me something?” He had a heavy Texas accent, the kind in which dropped g’s hit the floor like summer hailstones.

A touch of offhand amusement lurked in the corners of his mouth. “I usually save personal matters for after five,” he told me.

“I can’t wait that long.” I took a deep breath before adding boldly, “And I should warn you that if you get rid of me now, you’ll have to deal with me later. I’m very persistent.”

The trace of a smile lingered on his lips as he turned to the other men. “Would y’all mind waiting for me at the bar on the seventh floor?”

“No hardship,” one of them said in a brisk British accent. “We never mind loitering in the bar. Shall I order for you, Travis?”

As the men left, Jack Travis turned his full attention to me. Although I was medium height, hardly a short woman, he towered over me. “My office.” He motioned for me to precede him. “Last door on the right.”

Carrying Luke, I went to the corner office. A large fanned wedge of windows revealed the skyline, where relentless sunlight ricocheted off a stand of glass-skinned buildings. In contrast to the sterile reception area, the office was comfortably cluttered, with deep leather chairs and piles of books and folders, and family pictures in black frames.

After positioning a chair for me, Travis half-sat on his desk, facing me. His features were emphatically defined, the nose straight and substantial, the jaw nearly lacerating in its precision.

“Let’s make this fast, Ella-from-Austin,” he said. “I got a deal on the stringer, and I’d rather not keep those guys waiting.”

“You’re going to manage property for them?”

“Hotel chain.” His gaze flickered to Luke. “You might want to tilt that bottle; she’s getting air.”

I frowned and adjusted the bottle upward. “It’s a boy. Why does everyone assume he’s a girl?”

“He’s wearing Hello Kitty socks.” There was a distinct note of disapproval in his voice.

“They were the only ones available in his size,” I said.

“He’s only a week old. Do I have to worry about gender bias already?”

“You really are from Austin, aren’t you?” he asked wryly. “How can I help you, Ella?”

The task of explaining was so considerable, I hardly knew where to start. “Just so you’re prepared,” I said in a businesslike tone, “the story I’m going to tell you ends with a stinger.”

“My sister is Tara Varner. You went out with her last year.” Seeing that the name didn’t ring a bell, I added, “You know Liza Purcell? . . . she’s my cousin. She fixed you up with Tara.”

“That’s right.” Seeing that Luke had finished the bottle, I put the empty container in the diaper bag and draped the baby over my shoulder to burp him. “This is Tara’s son. Luke. She gave birth to him, left him with my mother, and took off somewhere. We’re trying to locate her. Meanwhile I’m trying to secure some kind of situation for the baby.”

Travis was very still. The atmosphere in the office took on a hostile chill. I saw that I had been identified as a threat, or perhaps just a nuisance. Either way, his faint smile was now edged with contempt.

“I think I get the stinger you’re working around to,” he said. “He’s not mine, Ella.”

Booklist:
“RITA-award winning Kleypas’s clever pairing of a testosterone-rich hero and and a wonderfully endearing heroine gives her latest romance its irresistibly sexy flavor, while adding fresh zest to her exceedingly successful series of loosely connected contemporary romances, which began with Sugar Daddy (2007). Kleypas’s fans and readers of women’s fiction alike will take to this richly rewarding story of love, commitment, and family.”

Romantic Times:
“Kleypas has written a perfect contemporary romance sure to stand the test of time. Each scene is masterfully crafted, and each emotion feels extraordinarily so real. Readers will be thinking about these superb characters long after closing the pages and rushing out to grab everything Kleypas has ever written. “

Publishers Weekly
Ella Varner grew up with a troublesome mother and an insecure sister, but she has managed to come out of it reasonably sane, with a good (if vegan) boyfriend, Dane, and a job as an advice columnist. All of this gets turned upside down when her sister disappears and sticks Ella with her newborn, Luke. Determined to find Luke’s father, Ella tracks down a likely suspect— millionaire playboy Jack Travis. The encounter results in Travis and Ella unexpectedly engaged in an irrepressible attraction. Meanwhile, Ella grows fond of baby Luke and fears what will happen when Tara returns. As Ella grapples with conflicting desires, she learns some important lessons about love and trust. Though Kleypas has trouble breaking her male characters out of archetype and the arc is familiar, Ella’s familial dysfunction distinguishes her from other heroines, and her self-awareness draws her out of a stereotypical shell. This will please romance fans, even if it hews a bit too closely to genre conventions. (Apr.)