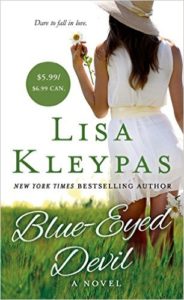 His name is Hardy Cates. He's a self-made millionaire who comes from the wrong side of the tracks. He's made enemies in the rough-and-tumble ride to the top of Houston's oil industry. He's got hot blood in his veins. And vengeance on his mind.

She's Haven Travis. Despite her family's money, she refuses to set out on the path they've chosen for her. But when Haven marries a man her family disapproves of, her life is set on a new and dangerous course. Two years later, Haven comes home, determined to guard her heart. And Hardy Cates, a family enemy, is the last person she needs darkening her door or setting her soul on fire.

A sneak peek at the second book in the Travis Series:

"Blue-Eyed Devil" is the story of the charming, volatile and ambitious Hardy Cates, who is determined to carry out his private revenge against the Travis family. Haven is the rebellious Travis daughter who struggles against her overpowering attraction to the most dangerous man in town. But when Hardy crashes a Travis family wedding, the heiress and the bad boy uncover an explosive chemistry that neither of them can deny. Hardy Cates is an unscrupulous rascal, but now he's trying to clean up his act. He is looking for the perfect society wife, the kind of woman Haven Travis could never be. Having once been burned by a love affair gone wrong, Haven vows to stay far away from the sexy heartbreaker. However, Haven discovers that the temptation of a blue-eyed devil is hard to resist. And then when a menace from Haven's past appears, Hardy may be the only one to save her...

In this scene, Haven Travis seeks comfort from her fiancé Nick Tanner. They are attending a family wedding at the Travis mansion:

To my relief, I saw the familiar outline of Nick’s head and shoulders near the dark arched doorway that led to the dine-in wine cellar. He had gone through the small wrought-iron gate and left it ajar. It looked like he was heading into the vault, which was lined with oak barrel stays that sweetened the air. I figured Nick must have gotten tired of the crowds and had come early to meet me. I wanted him to hold me. I needed a moment of peace in the middle of all the cacophony.

Skirting around the dining table, I went to the wine cellar. The gate closed behind me with a smooth clack. Reaching for the light switch, I flipped it off and went into the cellar.

“Just me.” I found him easily in the darkness, giving a low laugh as my palms slid over his shoulders. “Mmmn. You feel nice in a tux.”

He started to say something, but I tugged his head down until my half-open mouth skimmed the edge of his jaw. “I missed you,” I whispered. “You didn’t dance with me.”

His breath caught, and his hands came to my hips as I wobbled a little in my high heels. The wine-sweet air filled my nostrils, and something else . . . the scent of male skin, fresh like nutmeg or ginger . . . a sun-warmed spice. Exerting pressure on the back of his neck, I urged his mouth to mine, finding softness and heat, the tang of champagne melting into the intimate taste of him.

One of his hands traveled up my spine, coaxing out a shiver, a sweet shock, as the warmth of his palm met my bare skin. I felt the strength of his hand, and the gentleness, as it closed over my nape and tilted my head back. His mouth barely grazed mine, more a promise of a kiss than an actual one. I made a little sound at the brush of his lips and kept my face upturned, straining for more. Another lush descent, a dizzying pressure as he opened my mouth with his. He reached deeper, his tongue finding ticklish places that drew a shivering laugh from my throat.

I tried to curl around him, holding him with my arching body. His mouth was slow and searching, the kisses hard at first, then loosening as if unraveling from their own heat. The pleasure thickened, hard flushes rising through me, bringing the desire to full-slip ripeness. I wasn’t aware of moving backward, but I felt the frame of the tasting table high against my bottom, the sharp edge digging into my flesh.

Nick lifted me with astonishing ease until I sat on the chilled table. He took my mouth again, longer, deeper, while I tried to catch his tongue, tried to draw him as far inside as possible. I wanted to lie back on the table, an offering of aching flesh on sterile marble, and let him do anything he wanted. Something had been cut loose in me. I was saturated with excitement, drunk with it, and part of it was because Nick, who always seemed so in control, was fighting for self-restraint. His breath came in ragged puffs, his hands gripping my body.

He kissed my throat, tasting the thin, susceptible skin, his lips stroking the throb of my pulse. Panting, I slid my hands up to his hair, so soft and thick, layers of heavy silk in my palms.

A cold shot of horror went down to my stomach. “Oh God.” I was barely able to force the words out. I touched his face in the darkness, encountering hard, unfamiliar features, the scrape of shaven bristle. The corners of my eyes stung, but I wasn’t sure whether the imminent tears were caused by embarrassment, anger, fear, disappointment, or some unholy combination of all of them. “Nick?”

My wrist was caught in a powerful hand, and his mouth dragged softly over the insides of my fingers. A kiss burned the center of my palm, and then I heard a voice so smoky and deep I would have sworn it belonged to the devil.

Blue-Eyed Devil narrated by Brittany Pressley was named a best audiobook of 2020 by Audiofile Magazine.

Hardy Cates, introduced in Kleypas’ Sugar Daddy (2007), kisses Haven Travis in the dark at her brother’s wedding. She thinks she is kissing Nick Tanner, who she truly loves, and nothing—not even a sexy blue-eyed devil whose soul-searing kiss Haven can’t forget—is going to stop her from marrrying Nick. Two years later in Houston, a recently divorced Haven runs into Hardy again. The last thing Haven wants is to be involved, but Hardy is determined to prove that he truly is the only man for her.
Kleypas second poignant, passionate, and perfectly written contemporary romance is richly emotional and sinfully sexy.

Publisher’s Weekly:
Scenes of domestic abuse and the journey to recovery make Kleypas’s modern romance anything but fluff. A Wellesley grad and daughter of a Houston energy baron, Haven Travis is an unlikely romantic heroine until her brief but ardent encounter with a man who turns out to be Hardy Cates, the East Texas roughneck from Sugar Daddy who worked his way up from poverty and then outmaneuvered the Travis clan in a business deal. Haven’s engaged to Nick Tanner-a man her dad thinks is unfit for her-and though she and Hardy have a charged interaction, she elopes with Nick, and her father cuts her off. Nick turns out to be a bad guy, and a beaten and bruised Haven returns to Houston, where Hardy’s still at odds with her family. Their passion proves as fervent as ever, but demons from Haven’s recent past-as well as strife with her family and troubles at work and in bed-stand in the way. Kleypas isn’t a literary stylist, but she delivers a page-turning, formula-breaking romance that takes on social issues and escalates passion to new heights. (Mar.)