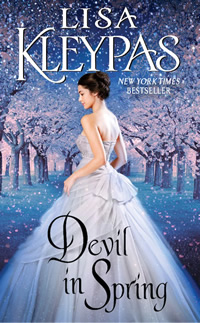 A sneak peek of the third novel in the Ravenels series

Evangeline, the Duchess of Kingston, lifted her infant grandson from the nursery tub and wrapped him snugly in a soft white towel. Chortling, the baby braced his sturdy legs and attempted to stand in her lap. He explored her face and hair with grasping wet hands, and Evie laughed at his affectionate mauling. “Be gentle, Stephen.” She winced as he grabbed the double strand of pearls around her neck. “Oh, I knew I shouldn’t have worn those at your bath-time. Too much t-temptation.” Evie had always spoken with a stammer, although it was now very slight compared with what it had been in her youth.

“Oh, Your Grace,” the young nursemaid, Ona, exclaimed, hurrying toward her. “I would have lifted Master Stephen out of the tub for you. He’s a fair armful, he is. Solid as a brick.”

“He’s no trouble at all,” Evie assured her, kissing the baby’s rosy cheeks and prying his grip from her pearls.

“Your Grace is very kind to help with the children on Nanny’s day off.”

Carefully the nursemaid took the baby from Evie’s arms. “Any of the housemaids would be glad to do it, since you have more important things to attend to.”

“There’s n-nothing more important than my grandchildren. And I quite enjoy spending time in the nursery—it reminds me of when my children were small.”

Ona chuckled as Stephen reached for the white ruffled cap on her head. “I’ll powder and dress him now.”

“Your Grace, you mustn’t.” Clearly the nursemaid was trying to strike an effective balance between sternness and pleading. “Not in your fine silk dress—you must sit in the parlor and read a book, or embroider something.” As Evie parted her lips to argue, Ona added meaningfully, “Nanny would have my head if she knew I’d let you help as much as I have.”

Knowing that Nanny would have both their heads, Evie responded with a resigned nod, although she was unable to resist muttering, “I’m wearing an apron.”

The nursemaid left the bathroom with a satisfied smile, carrying Stephen to the nursery.

Still kneeling on the bath rug in front of the tub, Evie reached behind her back for the flannel apron ties. Ruefully she reflected that it was no easy task to satisfy the servants’ expectations of how a duchess should behave. They were determined to prevent her from doing anything more strenuous than stirring her tea with a silver spoon. And while she was a grandmother of three, she was still slim and fit—easily able to lift a slippery infant from a washtub, or romp with the children through the orchard. Just last week, she had been lectured by the master gardener for climbing over a stacked stone wall to retrieve a few stray toy arrows.

As she fumbled with the stubborn apron knot, Evie heard a footstep behind her. Although there was no other sound or sign of the visitor’s identity, she knew who it was, even before he sank to his knees behind her. Strong fingers brushed hers away, and the knot was freed in a deft tug.

A low, silken murmur caressed the sensitive skin at the back of her neck. “I see we’ve hired a new nanny. How delightful.” Clever masculine hands slipped beneath the loosening apron, moving in a supple caress from her waist to her breasts. “What a buxom little wench you are. I predict you’ll do well here.”

Evie closed her eyes, leaning back between his spread thighs. A gentle mouth, designed for sin and sensation, wandered lightly over her neck.

“I should probably warn you,” the seductive voice continued, “to keep your distance from the master. He’s an infamous lecher.”

“No. Much worse. Especially when it comes to women with red hair.” He plucked a few pins from her coiffure until a long braid fell over her shoulder. “Poor lass—I’m afraid he won’t leave you alone.”

Evie shivered in reflexive pleasure as she felt him kiss his way along the side of her neck. “H-how should I handle him?”

A helpless giggle escaped her as she turned to face him.

Even after three decades of marriage, Evie’s heart still skipped a beat at the sight of her husband, formerly Lord St. Vincent, now the Duke of Kingston. Sebastian had matured into a magnificent man with a presence that both intimidated and dazzled. Since ascending to the dukedom ten years ago, he had acquired a veneer of dignity that befitted a man of his considerable power.

But no one could look into those remarkable light blue eyes, alive with glints of fire and ice, without recalling that he had once been the most wicked rake in England. He still was—Evie could attest to that.

Time had treated Sebastian lovingly, and always would. He was a beautiful man, lean and elegant, his tawny golden hair now lightly brushed with silver at the temples. A lion in winter, whom no one would cross except at their peril. Maturity had given him a look of cool, incisive authority, the sense of a man who had seen and experienced enough that he could rarely, if ever, be outmaneuvered. But when something amused or touched him, his smile was both incandescent and irresistible.

“Oh, it’s you,” Sebastian said in a tone of mild surprise, seeming to ponder how he had ended up kneeling on a bathroom rug with his wife in his arms. “I was prepared to debauch a resisting servant girl, but you’re a more difficult case.”

“You can debauch me,” Evie offered cheerfully.

“Why did you come to find me?” Evie asked languidly, her head tilting back as his lips slid to her throat.

“I’ve just received news from town regarding your son.”

“Gabriel. Unfortunately it’s a bit more complicated than his run-of-the-mill vice and depravity.”

“Why is he your son when you’re pleased with him, and my son whenever he’s done something wicked?” Evie asked as Sebastian removed her apron and began to unfasten the front of her bodice.

“Since I’m the virtuous parent,” he said, “it only stands to reason that his wickedness must come from you.”

“You h-have that exactly backward,” she informed him.

“Do I?” Sebastian fondled her as he considered her words. “I’m the wicked one? No, my pet, that can’t be right. I’m sure it’s you.”

“You,” she said decisively, her breath catching as he kissed the newly revealed hollow at the base of her throat.

“Hmm. This must be sorted out at once. I’m taking you straight to bed.”

“Wait. Tell me more about Gabriel. What has he done?”

Lifting his head, Sebastian looked down at her with a slight frown. He sighed shortly. “There’s been a scandal.”

“It’s serious this time. He’s managed to compromise an earl’s daughter. One of the Ravenels.”

Evie frowned, pondering the name, which sounded somewhat familiar. “Do we know that family?”

“I was acquainted with the old earl, Lord Trenear. His wife was a flighty, shallow sort—you met her once at a garden show and discussed her orchid collection.”

“Yes, I remember.” Unfortunately, Evie hadn’t liked the woman. “They had a daughter?”

“Twins. Out for their first Season this year. It seems that your idiot son was caught in flagrante delicto with one of them.”

“He takes after his father,” Evie said.

Looking highly insulted, Sebastian rose to his feet in a graceful motion and pulled her up with him. “His father was never caught.”

“Except by me,” Evie said smugly. Sebastian laughed. “True.”

“What does in flagrante delicto mean, exactly?”

“The literal translation? ‘While the crime is blazing.’” Picking her up easily, he said, “I believe a demonstration is in order.”

“But what about the s-scandal? What about Gabriel, and the Ravenel girl, and—”

“The rest of the world can wait,” Sebastian said firmly. “I’m going to debauch you for the ten thousandth time, Evie—and for once, I want you to pay attention.”

“Yes, sir,” she said demurely, and looped her arms around her husband’s neck, as he carried her to their bedroom.

When two strangers are found alone in a summerhouse during a ball in Victorian London, they’re forced into an engagement neither of them wants—at first.

Lady Pandora Ravenel is a social disaster. She can’t dance, she despises small talk, and she has no interest in finding a husband. She’s also very clumsy. So no one is surprised when she ventures out to a summerhouse during a ball to look for a friend’s lost earring and gets stuck while reaching under a piece of furniture. Gabriel Challon, Lord St. Vincent, happens along to rescue her. They’re discovered by the host of the ball, and Gabriel is forced to propose. Pandora is horrified.
. . .

Fans will appreciate cameos by some of the author’s most beloved characters, and the world of Victorian England is drawn with Kleypas’ usual sharp wit and well-researched political nuances.

A funny and charming story that will delight readers from the first page to the last.
Read the entire review

. . .
This thoroughly delightful novel is a showcase for Kleypas’ strengths as a writer. The time period details are flawlessly executed and the relationship between the hero and heroine, two people who at first meeting appear to be wildly disparate, intrigues and delights. The dialogue is witty and often hilariously funny, while the characters are engaging and eminently likable. Readers will find themselves thoroughly absorbed in this deeply emotional tale and anxiously awaiting the next novel in the series.
Read entire review