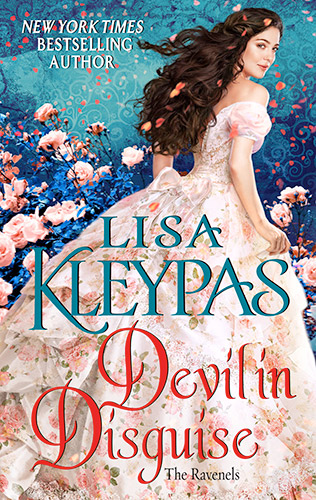 “The devil never tries to make people do the wrong thing by scaring them. He does it by tempting them.”

Keir doesn’t know why someone wants him dead until fate reveals the secret of his mysterious past. His world is thrown into upheaval, and the only one he trusts is Merritt.

Lady Merritt Sterling, a beautiful and charming widow, has been running her late husband’s shipping business for the past three years. In this scene, she’s showing a new client, Mr. Keir MacRae, to the company-owned flat where he’ll be staying . . .

Merritt ascended a narrow flight of stairs, while Keir MacRae followed. “I’m afraid the flat has only cold running water,” she said. “But you can heat water for a bath on the stove fire-plate.”

“I can wash with cold water the same as hot.”

“Oh, but not this time of year,” she said. “You might catch a chill and come down with fever.”

Now MacRae sounded amused. “I’ve never been ill a day in my life.”

“Never a sore throat or cough?”

“Not even a toothache?”

“How remarkably annoying,” Merritt exclaimed, laughing. “How do you explain such perfect health?”

“No one’s that lucky.” She unlocked the door at the top of the stairs. “It must be your diet. What do you eat?”

“Whatever’s on the table,” MacRae replied, following her into the flat and setting down the trunk.

Merritt pondered what little she knew about Scottish cuisine. “Porridge, I suppose.”

“Aye, sometimes.” Slowly MacRae began to investigate the room as they talked. It was simply furnished with a table and two chairs, and a small parlor stove with a single fire-plate in the corner.

“I hope the flat is acceptable,” Merritt said. “It’s rather primitive.”

“The floor of my house is paved with stone,” he replied dryly. “This is an improvement.”

Merritt could have bitten her tongue. It wasn’t at all like her to be so tactless. She tried to steer the conversation back on course. “You . . . you were telling me about your diet.”

“Well, mostly I was raised on milk, potatoes, dulse, fish—”

“I beg your pardon, did you say ‘dulse?’ What is that, exactly?”

“A kind of seaweed,” MacRae said. “As a lad, it was my job to go out at low tide before supper and cut handfuls of it from the rocks on shore.” He opened a cupboard to view a small store of cooking supplies and utensils. “It goes in soup, or you can eat it raw.” He glanced at her over his shoulder, amusement touching his lips as he saw her expression.

“Seaweed is the secret to good health?” Merritt asked dubiously.

“No, milady, that would be whiskey. My men and I take a wee dram of it every day, and it keeps us all sound and hale.” Seeing her perplexed expression, he continued, “Whisky is the water of life. It warms the blood, keeps the spirits calm, and the heart strong.”

“I wish I liked whisky, but I’m afraid it’s not to my taste.”

“It was no’ Scotch, then, but rotgut. Islay whisky starts with the fire of the devil’s whisper . . . but then the flavors come through, and it might taste of cinnamon, or peat, or honeycomb fresh from the hive. It could taste of a long-ago walk on a winter’s eve . . . or a kiss you once stole from your sweetheart in the hayloft. Whiskey is yesterday’s rain, distilled with barley into a vapor that rises like a will o’ the wisp, then set to bide its time in casks of good oak.” His voice had turned as soft as a curl of smoke. “Someday we’ll have a whisky, you and I. We’ll toast health to our friends and peace to our foes . . . and we’ll drink to the loves lost to time’s perishing, as well as those yet to come.”

Merritt stared at him, mesmerized. How handsome he was, she thought dazedly. His eyes were a piercing shade of ice-blue, with faint whisks at the outer corners, etched by laughter and sun and sharp windy days. He was a big, virile male in his prime . . . and he took her breath away.

“We’ll drink to the loves yet to come for your sake,” she managed to say, “but not mine.”

MacRae’s head tilted as he regarded her thoughtfully. The light slid over his hair and struck gleams of light gold in the thick amber locks. “You dinna want to fall in love?”

Merritt turned to wander around the flat. “I’ve never cared for the phrase ‘falling in love,’ as if love were a hole in the ground. It’s a choice, after all.”

“Is it?” MacRae began to wander as well. He paused at the open archway of the main room to view the connecting bedroom.

“Yes, a choice one must make according to common sense. I waited to marry until I found someone I knew would never break my heart.” Merritt paused with a bleak smile before adding, “Of course, my heart was broken anyway, when his steamer sank in the mid-Atlantic. Nothing would ever be worth going through that again.”

She looked up to find MacRae’s gaze on her, as bright as flicker of moonlight. He made no comment, but there was something curiously comforting about the way he looked at her, as if there were nothing she could say that he wouldn’t understand.

“Undemandingly pleasurable and guaranteed to go on the reread shelf. The novel abounds in the vintage pleasures of her writing: finely drawn characters; a tactile, sensuous style in both the sex scenes and the landscape descriptions; banter that illustrates the emotional compatibility of romantic partners; dual points of view that show both the hero’s and the heroine’s interior lives; moving moments of familial ties; and glimpses of couples from other novels to assure us that love lasts forever.”