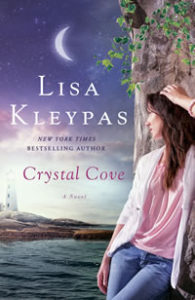 ONE WOMAN WHO HAS BEEN CURSED NEVER TO FIND LOVE . . .

ONE MAN WITHOUT A SOUL WHO WANTS HER MORE THAN LIFE ITSELF . . .

THEY MEET IN A SMALL ISLAND TOWN IN THE PACIFIC NORTHWEST, WHERE MAGIC IS IN THE AIR AND FATE IS A FORCE TOO POWERFUL TO DEFY. . . .

In New York Times bestselling author Lisa Kleypas’s Crystal Cove, Justine Hoffman has made a comfortable life for herself on the island of Friday Harbor. She is the proprietor of a successful boutique hotel, and she has the safe, predictable life she has always wanted. Growing up with her flighty, nomadic mother, Marigold, has instilled in her a deep longing for stability. But in spite of everything Justine has achieved, there is still something missing. Love. And after years of waiting and dreaming, she is willing to do whatever it takes to change her destiny.

What Justine soon discovers is that someone cast a spell on her when she was born, with the result that she will never find her soul mate. Determined to change her fate, Justine finds a way to break the enchantment, never dreaming of the dangerous complications that will follow.

And when Justine meets the mysterious Jason Black, she accidentally unleashes a storm of desire and danger that threaten everything she holds dear . . . because Jason has secrets of his own, and he wants more from her than fate will ever allow.

A mysterious guest is staying at Justine Hoffman’s Friday Harbor bed and breakfast . . . the elusive Jason Black, a successful videogame developer who scrupulously avoids the public spotlight. Justine meets Jason for the first time when he requests a couple of vodka shots to be brought to his room . . .

The door opened. Justine had a brief, dizzying impression of midnight eyes and hard features, and a sexy disorder of short black hair.

He gestured for Justine to enter the room, pausing just long enough to tell her, “Don’t leave yet.” He looked at her directly.

The glance lasted only a half-second, but it was nearly enough to knock Justine backward. His fathomless eyes–shrewd and opaque as blackstrap molasses–could have belonged to Lucifer himself.

Justine responded with a dazed nod and managed to set the tray on the table without spilling it. She was so unsettled that it took her a minute to realize he was speaking in Japanese. His voice was mesmerizing, a quiet baritone wrapped in shadow.

At a loss for what to do, she went to one of the windows and looked outside. The vestigial light was melon-colored at the horizon, darkening to a black plum meridian overhead. The fissure of a crescent moon gleamed white and clear like a claw mark in the sky.

A night made for magic.

Her attention returned to Jason Black, who paced slowly as he talked. He was a big man, elegantly lean, the easy athleticism of his movements hinting at deep tracts of muscle beneath the crisp white button-down shirt and khakis. Leaning over the table, he scrawled a few words on a notepad. A stainless steel Swiss Army watch gleamed on his wrist.

“Forgive me,” he said, shutting off the phone as he approached Justine. “Tokyo is sixteen hours ahead of us. I had to get in one last call.”

His manner was relaxed, but Justine had to fight the instinct to step back from him. Even though she knew he posed no threat to her, she had the sense of him as a dangerous creature, a tiger behind a thin glass wall.

“Of course,” she said. “Your Stoli is right over there.”

“Thank you.” His gaze didn’t move from hers. He extended a hand. “Jason.”

“Justine.” Her fingers were swallowed in a deep grip that sent a jolt of warmth to her elbow. “I hope your room is satisfactory.”

“Yes. However . . .” Releasing her hand, he said, “I’m curious about something.” He nodded toward the glazed earthenware flowerpot on the table. It contained a double-stemmed moth orchid, each stem bearing an inflorescence of snowy-white blooms. “I asked for an arrangement of white flowers. But this–“

“You don’t like it? I’m sorry. First thing in the morning I’ll get you another–“

“It would be no trouble–“

“Justine.” He lifted a hand in the peremptory gesture of a man who wasn’t used to being interrupted. She fell instantly silent. “I like the orchid,” he said. “I just want to know why you chose it.”

“Oh. Well, it’s nicer to have a living, breathing plant in the room instead of a cut bouquet. And I thought an orchid would go with the Klimt artwork.”

“Do you have to be somewhere?”

She glanced at him in bemusement. “Not really.”

Justine blinked and knit her fingers together. “I was told you’re not much on small talk.”

“It’s not small talk if it’s someone I want to talk to.”

She gave him a carefully neutral smile. “But you must be tired.”

“I’m always tired.” Jason gripped the back of the chair, lifted it easily with one hand, and placed it near the bed. He sat on the edge of the mattress, and gestured to the chair. “Have a seat.”

Another command. Justine was half-amused, half-annoyed, thinking that he was entirely too used to telling people what to do. Why did he want to talk to her? Was he hoping to find out something about Zoë or Alex, something he could use during the negotiations for the Dream Lake development?

“Only for a few minutes,” she said, lowering to the chair. “It’s been a long day.” Pressing her knees together and folding her hands in her lap, she looked at him expectantly.

Jason Black was so darkly beautiful, so striking in his cool self-assurance that he seemed more like a fantasy figure than an actual human being. He appeared to be on the early side of his thirties, wearing an air of disenchantment like a bulletproof vest. “Too handsome for his own good,” was how his assistant Priscilla had put it . . . but it would have been more accurate to say he was too handsome for anyone’s good.

“Why are you staying here?” she asked bluntly. “You could have chartered a luxury yacht and moored it in the harbor. Or gotten a hotel penthouse in Seattle and flown in for the day.”

“I’m not the luxury yacht type. And the inn looked like the right place for a vacation while we negotiate terms for the Dream Lake project.”

Justine smiled at that. “You’re not on vacation.”

“No, a vacation is when you spend entire days doing nothing productive. You take pictures of scenery, buy stuff you don’t need, eat and drink too much, sleep late.”

“You don’t like to relax,” she said rather than asked.

“Maybe the point is that every now and then you should take a break to look back and enjoy what you’ve accomplished.”

“I haven’t accomplished enough to be able to enjoy it.”

“You’re the head of a big company and you’re a gazillionaire. Most people wouldn’t complain about that.”

“What I meant,” he said evenly, “is that I can’t take credit for the company’s success. I have a good team. And we’ve had some luck.” He took one of the vodka shots and nudged the silver tray toward her. “Here.”

Justine blinked. “You’re asking me to have a drink with you?”

She gave a disconcerted laugh.

His eyes narrowed. “Why is that funny?”

“But if I asked you that way, you might turn me down.”

“Do you ever get turned down?” she asked skeptically.

“It’s been known to happen.”

“I find that hard to believe. Anyway, I’m not good at following orders. I need to be asked.”

Jason’s gaze was steady and intent on hers. After a moment he asked, “Would you stay and have a drink with me?”

KIRKUS REVIEW
A love story that draws on all the senses, including the proverbial sixth. There is magic, there is insight—”the best part of the relationship wasn’t all the things they agreed on—it was when they disagreed, when they helped each other to look at things in a new way”—and there is humor: “I would only go out with a guy if he had a good personality, a decent body, and a job. Now I’d settle for a man who isn’t currently married or incarcerated.” The smart, funny and sensitive Justine Hoffman was born shortly before her father died. Losing the great love of her life was so hard on Justine’s mother, Marigold, that Marigold cast a spell on her daughter to protect her from the pain of finding and then losing that kind of love. What her mother did based on a loving desire to protect her child, grown-up Justine views as a curse that needs to be lifted. Marigold is a witch and raised her daughter in the pagan tradition. She wanted Justine to join her coven, but Justine preferred to run a B&B at Friday Harbor in the state of Washington, the one place she and her nomadic mother have ever stayed long enough for Justine to feel at home. Her business partner, Zoë, a distant cousin, encourages Justine to continue looking for “Mr. Right,” but Justine feels that unless she can reverse the curse that leaves her unable to feel that kind of love, she wouldn’t recognize Mr. Right, and has maybe already found him without knowing it. But when a famous video game creator books the B&B, there is no mistaking the sparks that fly. When this man searching for his soul meets this woman searching for her heart, the drama hits the ground running. A witty, moving and entertaining read.

Romantic Times:
(Top Pick!)
If you’ve already visited Friday Harbor, Kleypas’ latest will feel like you never left, as she seamlessly reintroduces readers to the characters who live on this magical island. Both heartbreaking and heartwarming, this story really does have it all, including a tortured soul who desperately wants love and a dark stranger who wants nothing to do with love at all. You can’t go wrong with Kleypas for a rewarding and deeply satisfying read. This is one of her best yet.

All About Romance:
Crystal Cove is a fun, scary, juicy and above all, heart wrenching read.