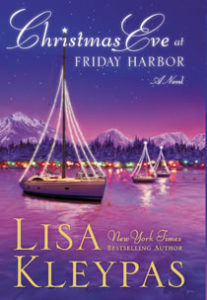 One rain-slicked night, six-year-old Holly lost the only parent she knew, her beloved mother Victoria. And since that night, she has never again spoken a word.

The last thing Mark Nolan needs is a six-year-old girl in his life. But he soon realizes that he will do everything he can to make her life whole again. His sister’s will gives him the instructions: There’s no other choice but you. Just start by loving her. The rest will follow.

Maggie Collins doesn’t dare believe in love again, after losing her husband of one year. But she does believe in the magic of imagination. As the owner of a toy shop, she lives what she loves. And when she meets Holly Nolan, she sees a little girl in desperate need of a little magic.

Three lonely people. Three lives at the crossroads. Three people who are about to discover that Christmas is the time of year when anything is possible, and when wishes have a way of finding the path home… in Lisa Kleypas’s Christmas Eve at Friday Harbor.

Christmas Eve At Friday Harbor was the basis for the Hallmark Hall of Frame Move, Christmas With Holly!

Entrusted with the guardianship of his orphaned niece Holly, Mark Nolan plans to marry his longtime girlfriend Shelby. But an unwelcome and tantalizing distraction appears in the form of Maggie Conroy, a young widow who has recently opened a toy shop at Friday Harbor. Mark is a cynic and a realist, but Maggie is a dreamer who hopes to make him believe in magic . . .

As anyone familiar with the Washington State Ferry system knew, ferry delays could happen at any time for a variety of reasons, including rough seas, low tides, onboard traffic accidents, medical emergencies, or maintenance issues. Unfortunately, a “necessary repair to a vessel safety feature” was being given as the reason for a delay on the Sunday afternoon departure.

Having arrived an hour early to get a decent place in the long parking lanes leading to the ferry landing, Mark was left with time to kill and nothing to do. People were getting out of their cars, letting their dogs out, wandering to the terminal building to get refreshments or magazine. It was overcast and misty, an occasional cold raindrop breaking through.

Feeling restless and moody, Mark walked toward the terminal. He was starving. Shelby hadn’t felt like going out for breakfast that morning, and all she’d had in the apartment was cereal.

It had been a good weekend with Shelby. They had stayed in and talked and watched movies, and on Saturday evening they had eaten Chinese takeout.

A breeze whipped directly from the Rosario Strait, bringing a clean salty scent, slipping into the collar of his light jacket like cold fingers. A shiver chased down his neck. He breathed deeply of the sea air, wanting to be home, wanting . . . something.

Entering the terminal, Mark headed toward the café, and saw a woman lugging a weekend bag to a nearby vending machine. A smile tugged at his lips as he saw her long streamers of red hair.

Thoughts of her had lurked in his mind all weekend. In idle moments, scenarios of how or when he might see her again had played in jaunty loops. His curiosity about her was relentless. What did she like for breakfast? Did she have a pet? Did she like to swim? When he had tried to ignore these questions, the fact of having something to ignore had made it all the more persistent.

He approached Maggie from the side, noticing the frown notched between mahogany brows as she studied the contents of the vending machine. Becoming aware of his presence, she looked up at him. The cheerful, quirky energy had been replaced by a vulnerability that went straight to his heart. He was caught off guard by the force of his response to her.

What had happened during the weekend? She’d been with her family. Had there been an argument? A problem?

“You don’t want any of that stuff,” he said, with a nod toward the array of glassed-in junk food.

“Not one item in that vending machine has an expiration date.”

Maggie scrutinized the display as if to verify his claim. “It’s a myth that Twinkies last forever,” she said. “They have a shelf life of twenty-five days.”

“At my house they have a shelf life of about three minutes.” He looked into her dark eyes. “Can I take you to lunch? We’ve got at least two hours, according to the ferry agent.”

A long hesitation followed. “You want to eat here?” she asked.

Mark shook his head. “There’s a restaurant down the road. A two-minute walk. We’ll stow your bag in my car.”

“There’s nothing wrong with having lunch,” Maggie said, as if she needed to reassure herself of something.

“I do it nearly every day.” Mark reached for her overnight bag. “Let me carry that for you.”

She followed him from the terminal building. “I meant the two of us having lunch. Together. At the same table.”

“If you want, we could sit at separate tables.”

He heard a laugh stir in her throat. “We’ll sit at the same table,” she said decisively, “but no talking.”

As they walked along the side of the road, the mist thickened into a drizzle, the air white and wet.

“It’s like walking through a cloud,” Maggie said, drawing in deep breaths. “When I was little, I used to think that clouds must have the most wonderful taste. One day I asked for a bowl of cloud for dessert. My mother put some whipped cream in a dish.” She smiled. “And it was just as wonderful as I had imagined it would be.”

“But did you know at the time that it was only whipped cream?” Mark asked, fascinated by the way the mist had provoked little wispy curls around her face.

“I have problems trying to figure out where to draw the line for Holly,” Mark said. “In the same classroom where she’s learning that dinosaurs were real, they’re also writing letters to Santa. What am I supposed to tell Holly about what’s real and what’s not?”

“Has she asked about Santa yet?”

“What did you tell her?”

“I said I hadn’t decided one way or the other, but a lot of people believe in him, so it was okay if she wanted to.”

“That was perfect,” Maggie said. “Fantasy and make-believe are important for children. The ones who are allowed to use their imaginations are actually better at drawing the line between fantasy and reality than those who aren’t.”

“Who told you that? The fairy who lives in your wall?”

Maggie grinned. “Smart-ass,” she said. “No, Clover wasn’t the one who told me. I read a lot. I’m interested in anything having to do with children.”

“From what I can tell, you’re doing fine.” On impulse she caught at his hand, her fingers squeezing lightly in a gesture meant to reassure and offer comfort. Mark was pretty sure that was the way he was supposed to interpret it. Except that his hand closed over hers and turned the spontaneous clasp into something else. Something intimate. Possessive.

Maggie’s grip loosened. Mark felt her indecisiveness as if it were his own, her unwilling pleasure in the way their hands fit together.

The press of skin to skin, such an ordinary thing. But it had set the axis of the entire earth off-kilter. He couldn’t seem to assess how much of his reaction to her was physical and how much was . . . other. It was all tangled together in a way that was new and visceral.

But he still felt the imprint, the shape of her fingers, as if his pores had begun to absorb her.

Publishers Weekly
“Kleypas (Love in the Afternoon) finds a little romantic magic in this spritely charmer. Mark Nolan’s happy-go-lucky bachelorhood is interrupted by the death of his sister and his subsequent guardianship of her six-year-old daughter, Holly, who is traumatized into muteness and desperately seeking a maternal figure. Enter Maggie Collins, a toy shop owner who lost her own husband to cancer. As the holiday season draws closer, Maggie, Mark, and Holly begin to spend more time together, and Maggie and Mark’s attraction becomes too powerful to ignore. Kleypas’s holiday offering is sweet, romantic, and genuine, and avoids, thankfully, all the cheesy holiday miracle clichés. A solid romance with strong leads, this is a refreshing holiday treat.”

Romantic Times
“Kleypas can do no wrong. If you want a fantastic read, pick up this poignant, heartbreaking and deeply satisfying book. Kleypas has a knack for making readers cry, laugh and cheer–often within the first couple of pages.”
Annette Elton